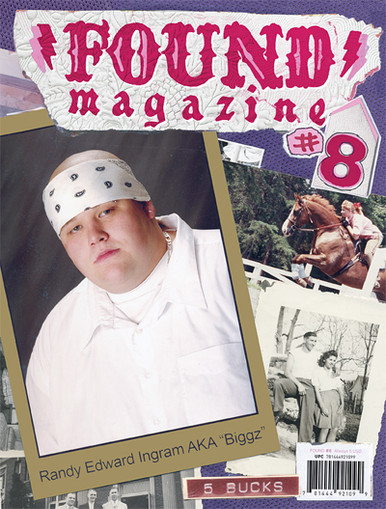 Sorry but this item is currently unavailable.

Please check back at a later stage.

Found #8
(October 2012, 96 pages)
The Pen Is Mightier Than The Sword.
As The Boston Globe once said about FOUND, issue #8 is "like mainlining the everyday world." FOUND #8 reveals the entire spectrum of human emotion, one lost scrap of paper at a time, and introduces you to an indelible, irascible cast of real-life characters like Yardman, a frustrated husband who's submitting his letter of resignation, Pedro The Gangbanger, an aspiring screenwriter named Chuck, and Jesse Marquez, a charming school kid obsessed with getting good grades and drinking water. Read the heart-wrenching story of lovers trying to overcome a long prison sentence, and follow a 1950s immigrant on his journey across America by Greyhound bus. Learn about filmmaker Lynn Shelton's earliest finds, and visit found photo collector John Foster's secret vaults. Plus an extended, intimate interview with underground rapper Randy Edward Ingram a.k.a. "Biggz" -- whose old promo photo was found in an abandoned desk on the street, prompting a search for the man behind the find. FOUND #8 contains hundreds of other magical love letters, to-do lists and journals, found on the streets from Los Angeles to Louisiana, Stockholm to Seoul, each one more intriguing, beautiful, and hilarious than the last.